Inspired by the Amazon Dash-style esp8266 IoT button, I built a button my distant family could use to request a refill of my home-made jam (though it could be used for anything). To keep with the theme, i built the whole thing to fit in a standard 8oz jam jar.

Unlike the inspiration, this button should be able to live for months in the pantry without power, so it needed a power switch. After designing a P-channel mosfet circuit to handle this, i came across the adafruit powerswitch which is pretty much exactly what i needed. Throw a micro-lipo battery charge circuit in there and BOOM - button that turns on the ESP chip, and allow it to turn itself off. 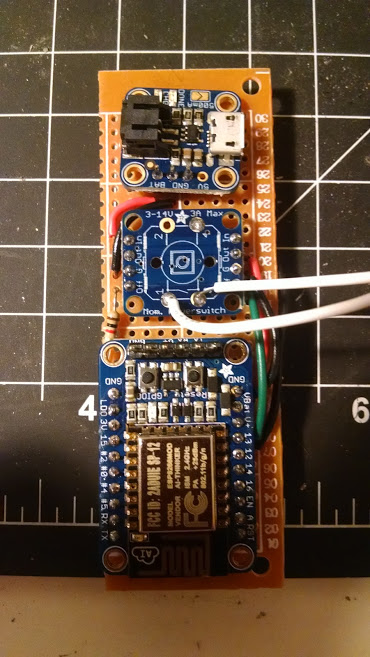 The powerswitch means that there is no longer a “button press” from the ESP perspective, but the IFTTT event should fire as soon as it gets connected to the wifi network. Minor code changes were needed to make that happen, and then assert the pin connected to the powerswitch’s p-fet gate (to power off the device). All code is available on github/muncus/jambutton.

After configuring a couple of IFTTT recipes, a press of the button results in ~20 seconds of powered-on time for the device, and a pushbullet notification being sent to my phone.

I’m currently playing around with a small thermal printer to print out a physical receipt for the jam order, so they are harder to ignore. :)